19/02/2015 After a few days of amazing hiking in the Serra dos Orgãos around Petrópolis and Teresópolis, I am now back in Rio de Janeiro and ready to watch the Champions League finale at the beach followed by hopefully an awesome sunset at Praia do Aproador. This update will commence a new country and continent, arriving in Colombia’s border town of Capurganá, which can not be reached by car and is famed to be one of the best diving spots in Colombia; giving me a very good reason to do my first fun dives after my PADI Certification in Utila 🙂

The small boat ride from Supzurro at the border to Capurganá was charged with $5, a lot for the 10 minute ride! You can also do a two-hour hike over the hill to reach the little village, a much cooler way to arrive certainly; just a little bit problematic if you want to make it to Capurganá quickly in order to reserve a spot in one of the nicer hostels. After splitting up in groups and checking our options, we decided to settle down at Dive & Green for $20.000 Pesos per night – they give you an discount if you dive with them, which we obviously did because of the great spots around here. In the evening we met up with everyone from the San Blas Island Cruise again to have an all-you-can-eat dinner. Having been used to great food from those guys, I happily paid the 10$ and was looking forward to eat at least three pizzas! Unfortunately, the food was VERY limited in the end and everyone was only able to get just three small slices and a bit of pasta. I felt a bit cheated after that 🙁

We woke up early the next morning to get ready for our two early morning fun dives! Paying 80$ for two tanks is an okay price I guess, especially in an remote place like Capurganá, which only has two diving facilities as well. The other one offered as a better price, however Dive & Green looked much nicer and more professional and we were not disappointed at all! The first dive was a bit boring, at least for me, since the beginning did not offer a lot and I ran out of air about 15 minutes before the other, more experienced, divers! I really have to work on my breathing technique, something that is totally normal to beginners according to our dive master. 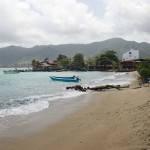 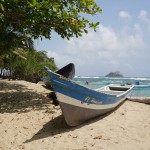 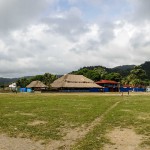 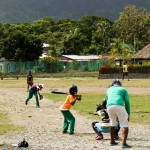 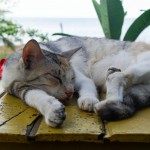 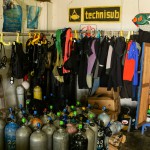 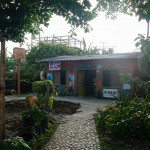 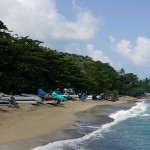 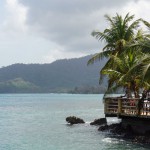 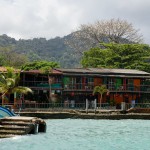 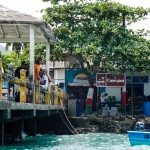 For the second dive we ventured into an early called “La Cueva” and it was absolutely amazing! Even though only the advanced divers in our group were allowed to dive all the way through the tiny cave, eventually popping out of a small hole again, it was still a great experience for me to at least enter the cave and look around a bit before heading back to the entrance again. Really cool stuff! I was again running out of air a bit faster than the rest, but lasted longer than in the first dive. Maybe at some point I can get the opportunity to finish the advanced course and work on that issue.

After a long night’s sleep, I explored the town a little bit on the last day before heading out to Necoclí with a small motor boat, which was labelled as a ferry. It was a bit weird to pay a guy on the street and then wait for a long time until it finally arrived with a big delay, I was a bit afraid of being the victim of a scam but apparently it was the normal way it works over there 🙂 The two hour ride was very uncomfortable but also a lot of funny since we were constantly jumping into the air due to very high waves. Sometimes it really looked like we would flip over but it never happened. My camera bag (secured in another garbage bag) was very wet afterwards, including all my money and passport. 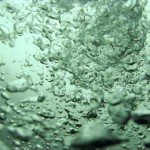 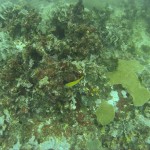 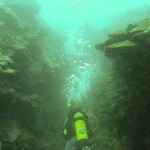 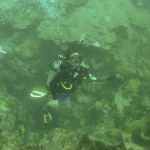 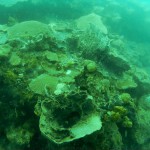 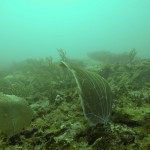 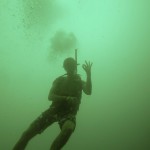 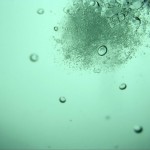 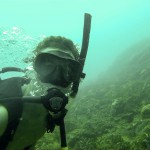 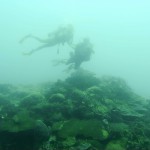 Necoclí looked like a real cool places to hang out for a while, however I decided to join a group to start a series of bus journeys, eventually arriving to Cartagena in the evening. I used the window seat and air in the first bus to dry my passport bit while trying not to hit my head too many times since the bus was really speeding. We arrived at the bus station in Monteriá at 19:30 after squeezing all four of us including backpacks into a tiny taxi, just missing the last bus. Luckily, the argentinean guys in the group managed to get a good private van deal for 40.000 instead of 55.000 pesos and we could leave at 20:30, finally arriving in Cartagena at 1AM! Nearly all hostels were booked out and the three of them got the last spots in one of the hostels while I ended up in Casa Vienaa for 28.000 pesos, which seemed to be the cheapest option and they had one more spot free! I went out for some drinks with a few germans I ran into before getting some sleep somewhen around 3 or 4 AM 🙂