06/02/2015 This morning I was woken up by the rain penetrating my tent here in Boquete, Panama. Maybe I need to find another place after all 🙂 The following update will propably be the shortest ever, I just didn’t want to mix it up with the next one covering Utila. So even if it’s just a few pictures, I hope you will still enjoy the views from San Pedro Sula’s very own “Hollywood Hill”; or in this case “Coca Cola Hill” 🙂

You should avoid certain areas in San Pedro Sula, which is, according to Wikitravel, “the most dangerous place on earth, with an average of more than three homicides per day”. Luckily I was staying with a cool Couchsurfer and together with his other long time traveler friend, we spent most of the time inside drinking rum anyway! At some point I think I heard a gunshot actually, but it could have been something else as well 🙂

We also got active once actually, hiking up the local “Coca Cola Hill”, named by the huge Coca Cola sign which looks very much like the Hollywood sign. The walk up the hill is pretty safe during the day as it passes a lot of rich people’s houses; by the time it got darker though, we wasted no time getting down again. After another night of rum I was headed to the airport to catch my flight to the Island of Utila. Being very hungry, I could only find one specific sandwich there, which would play a bigger role in Utila in a few days… 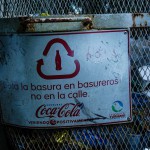 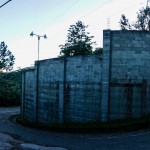 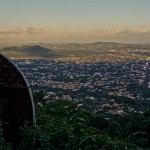 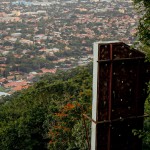 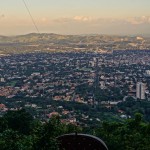 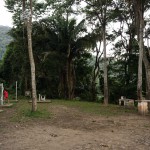 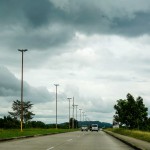 Posted by Chris on 6th February 2015 in RTW, Travel