Sweden is a truly magnificent place for anyone who likes nature and camping. It offers beautiful landscapes, interesting cities and the freedom of setting up your tent in the nature on a legal basis. I set out to drive along the southern part of the country and will share my experiences in the following short report.

Exploring Sweden was high up on my To Do list after buying a new tent and other outdoor gear. Julia, my girlfriend at the time, joined me and we used her car to drive from Oldenburg to Malmö via Copenhagen. It took us seven hours and a never ending drive across the 8km long Øresund bridge to finally see the iconic Turning Torso of Malmö. 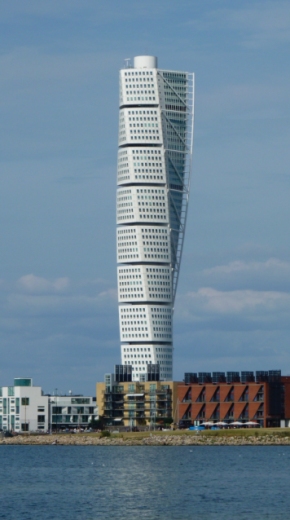 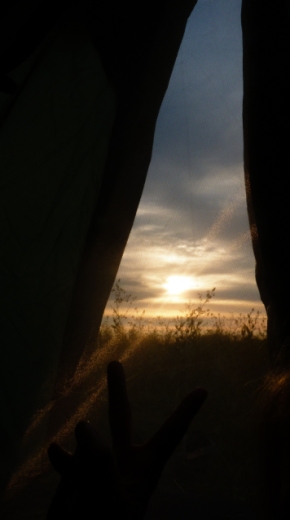 First night in the tent.

We had lunch and started to drive around the city for a bit, without spending too much time. It was already quite late and we planned to stay in the tent for the first night, so finding a nice spot to set up the tent was the first priority. Malmö seemed to be rather less interesting anyway and leaving it behind was not hard.

Shortly after we left the city and headed into the country side, I spotted a path leading towards the sea in an inhabited area. We parked the car to check it out and left our big luggage in the trunk to avoid carrying it back again in case the spot wouldn’t suit us. However, it turned out to be just great, as we discovered an old bunker close to the water on a wide open space of grass – the perfect location to set camp!

The sun was already setting when I finished and it was now time to make a fire for our dinner. I spent the following 30 minutes trying to achieve this task and all I could get was some light bursts with a lot of smoke… back to the drawing board or reading my outdoor book in this case 🙂 We ended up having lunch prepared in my camping cooker, as the branches were just a bit too wet and soon made ourselves at home in my one person tent for a good night’s sleep. 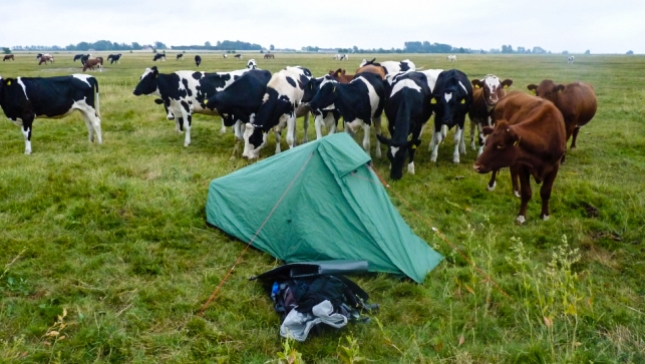 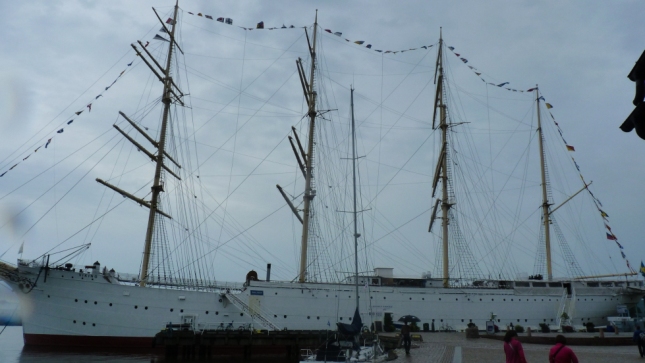 The four-masted “Viking” in Gothenburg.

A growling MOOO sound woke me up at 6AM and we found ourselves surrounded by at least 15 cows, enjoying their breakfast grass around our tent. Curious and scared as they are, we had our fun with our unexpected visitors before leaving our first wild camping spot again – off to an interesting start! 🙂

We headed up north to Gothenburg, parked our car in the center and started to walk around in the unpleasant rain. The first attraction we stumbled upon was the four-masted “Viking” ship, which anchored in the harbor and was very nice to look at. The Bohus Fortress was closed unfortunately and the rest of the rainy city did not really keep us any longer.

Leaving the city, it was time to find the next spot to sleep and it took us quite a while to do so this time. Driving from village to village on our way north east to the Vänern lake, we found ourselves in a race against time in order to make camp before night fall. We just couldn’t find a suitable spot away from private houses this time! 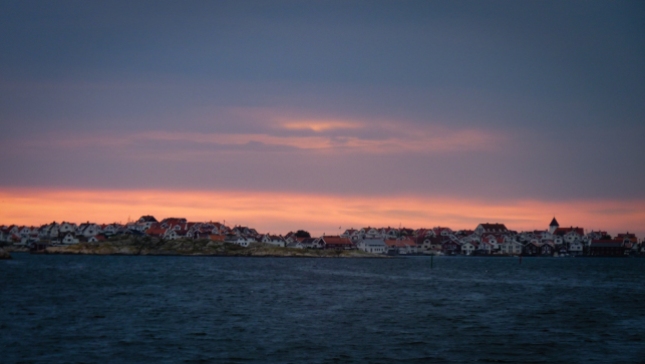 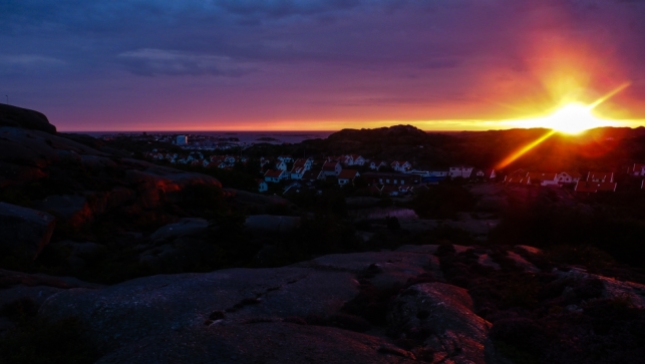 Sunset at the camp spot.

I kept looking out for good spots and eventually, somewhere near Trollhättan, discovered a boulder field next to a small stretch of grass and tree’s on the outskirts of a village. We enjoyed a nice sunset from there before it started to rain once more. Julia was sick of it and decided to sleep in the car.

The rain became stronger and stronger, but I did not want to sleep in the car as I’m a lot taller than her and I just can’t sleep well in cars in general. So I decided to set up the tent in the pouring rain, while more and more water was coming down from the now blackened sky. I told myself that I will eventually get into this situation again without a nearby car and decided to stick to my plan.

Having set up the tent, it took me another ten minutes to get rid of all the water inside. It was an unpleasant and sweaty situation at first and only after the tent was dry, I could finally relax and enjoy the sound of raindrops splashing against the tent. Listening to it always helps me to calm down and I could finally sleep. 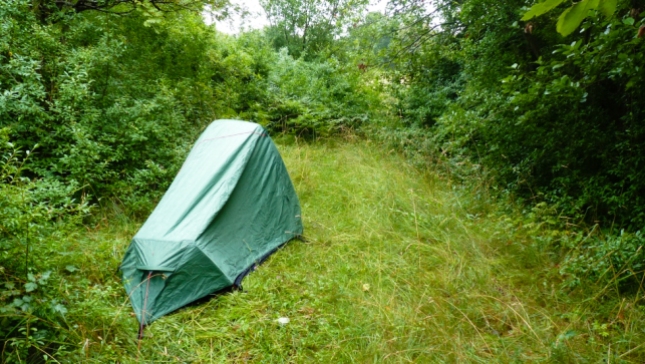 Camp on the next morning.

Church on the road to Kinnekulle. 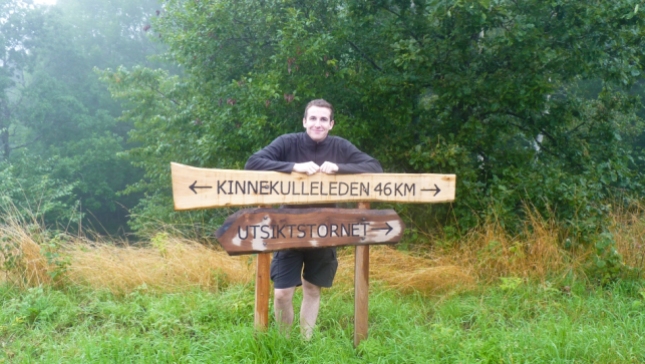 Julia had a good night’s sleep in the car and we headed off to our next destination for a bit of hiking: Kinnekulle. It was still rainy while we drove on the narrow county side roads, but the mist in the air made up for some very atmospheric pictures this time as we passed several churches. We came across some typical old Swedish red wooden houses before reaching a camping spot directly at the Vänern, Sweden’s largest lake.

The spot looked very good and we decided to come back in the evening to have some nice food and a shower after our hike. Kinnekulleleden was just a short drive away from here as well and we were unlucky with the weather as we reached the starting point of the 46km trek. The atmosphere was quiet nice, but the visibility horrible and we decided to head back to the car to set up the tent after we reached a big observation tower.

After days of rain, we were finally blessed with some sunshine while we continued our journey to the north east. Julia wanted to check out the university in Uppsala, one of the possible places for her to study in the future. It was indeed a very nice one and the city also had a nice flair to it, certainly a good place to dig into studies! We headed down south to finally reach our destination for the next few days: Stockholm. 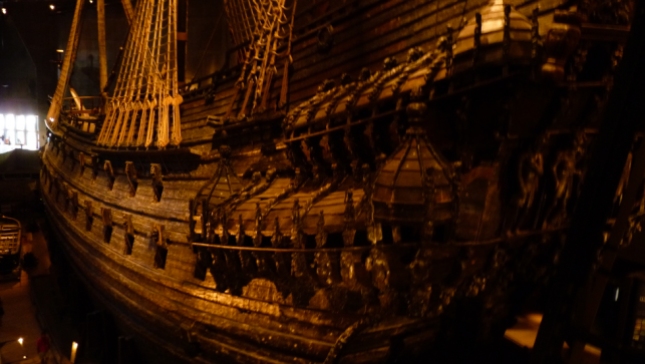 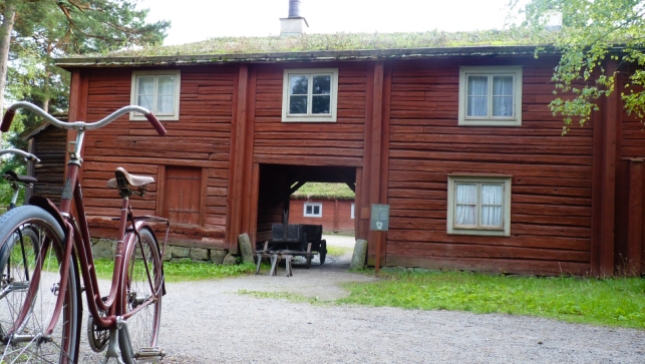 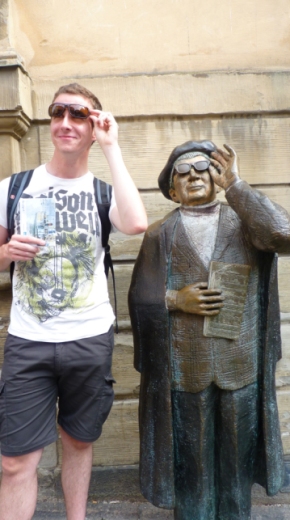 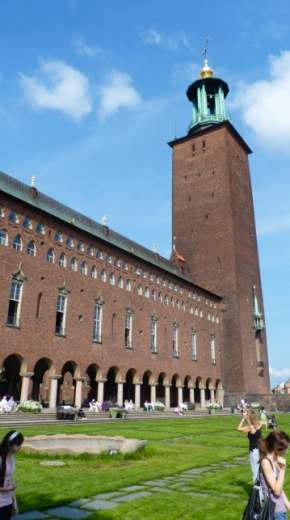 Stockholm is an amazing city. Surrounded by the water of lake Mälaren and situated on 14 islands, it contains a lot of beautiful architecture, great museums and as you might have heard before: Some very good looking blond human beings 🙂 However, we couldn’t discover it all just yet, as we didn’t know where to sleep when we arrived in the city around 5PM. The tourist information provided us with some good tips and suggested to stay at the Bredäng camping spot in the west of the city.

The first target on the next day was the Vasa museum. It is built around the 17th century warship Vasa, which sank on her maiden voyage in 1628. The museum is very interactive and set up up on different levels around the ship. As you make your way up, it offers a lot of very interesting illustrations and models to tell the tragic story of how it was possible that it sunk just 2km away from the harbor. It is still my favorite museum until now in March 2013!

Another highlight of the city is the zoo / open air museum combination called Skansen. You are able to see some old traditional Swedish houses as well as a lot of animals such as reindeers and the famous monk at the same time! Very interesting and definitely worth a visit after the Vasa museum as it is located on the same island, Djurgården. 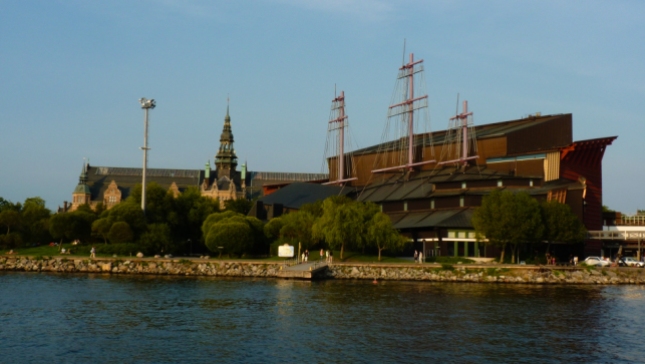 Vasa museum from the outside. 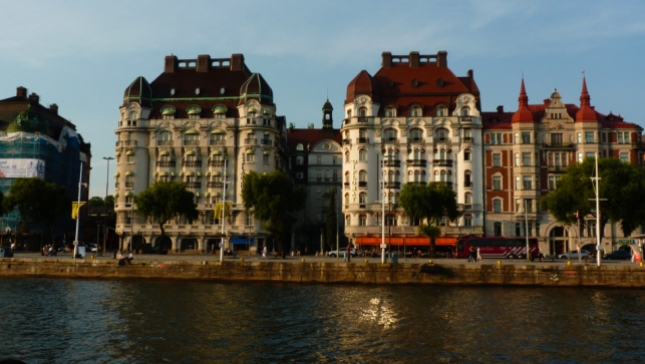 Our last day in Stockholm slowly came to an end and we finished it up by taking a boat from the public transportation system. We were driving towards the east part of the city and had some nice views on the harbor sites, I don’t think that the actual tourist boats offer much better views, so consider taking public transportation for a few euros if you can live without the commentary.

We got off the boat at a different station and walked to the Kaknäs tower to have (an expensive) dinner in the 170m high TV tower. Some balloons made up for a nice view on the otherwise not so spectacular aerial view of Stockholm. It was already dark while we waited for the bus to take us home to our tent at the Bredäng camping spot and we were really exhausted from the last days of sightseeing in the city. 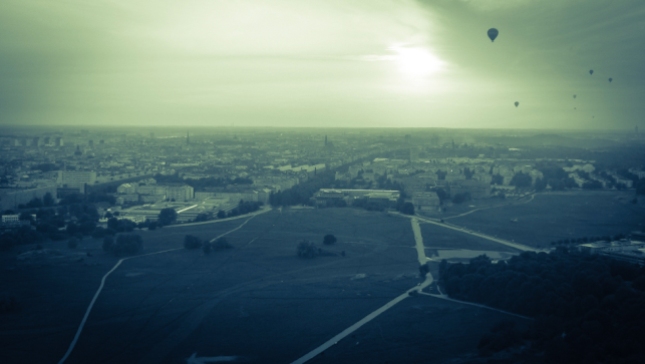 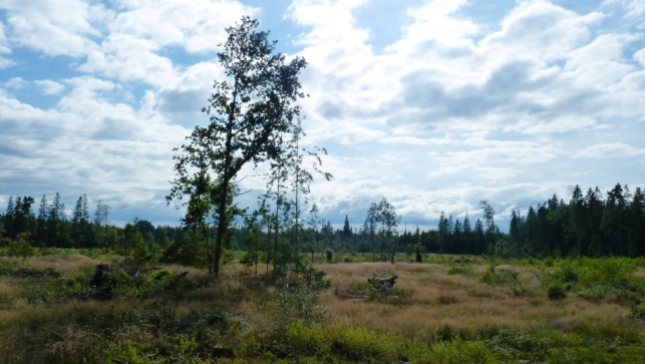 Landscape on the way down south. 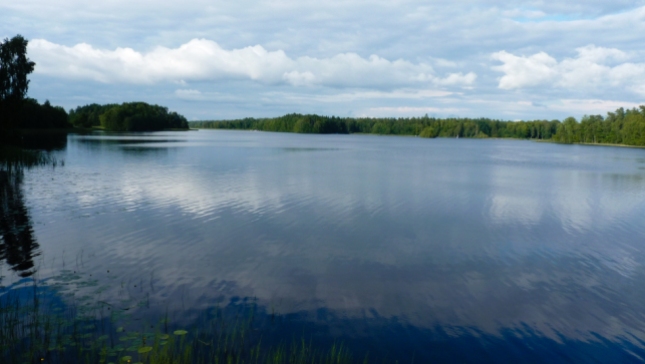 We left Stockholm on Friday, the 13th (Hoho) on the way back to Germany. One more night of wild camping was ahead of us and again, we needed to make sure to find a nice location. The way down south west turned out to be gorgeous at stages and while we made several stops to find a proper location, Julia could just not make friends with all the buzzing mosquitoes around us 🙂

Arriving at a village, I started to ask the locals if they knew any good areas to set up the tent. One of them was eventually providing us with the ultimate insider location tip, as he described a hidden path into the forest. We had to remove some chains in order to open a gate, which lead to a private property to someone who has not been in Sweden for over ten years and it lead us to the most awesome location directly at the Bolmen lake.

We were completely alone at this remote spot of the lake and no other signs of human beings could be seen. There was even a tiny little spot of sandy beach! I set up the tent, actually made a fire this time and we just enjoyed our last night in the nature – certainly one of my finest wild camping spots as of now! Reach out for me if you are in the area and I will try to find the exact spot of it, I guess the landlord will not get back any time soon 🙂 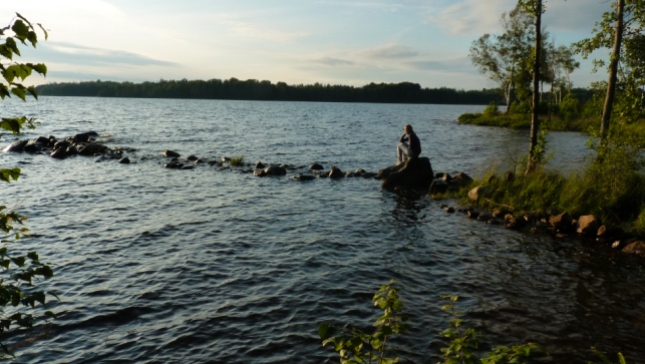 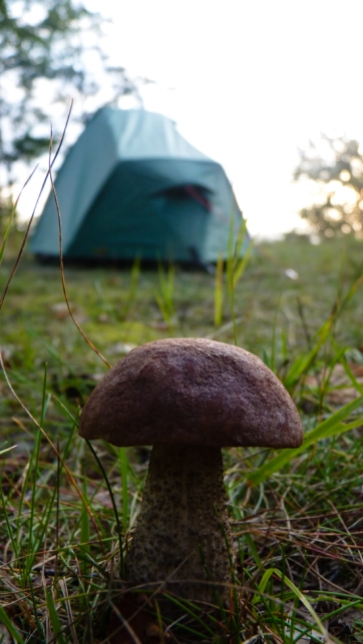 The tent and a mushroom 🙂 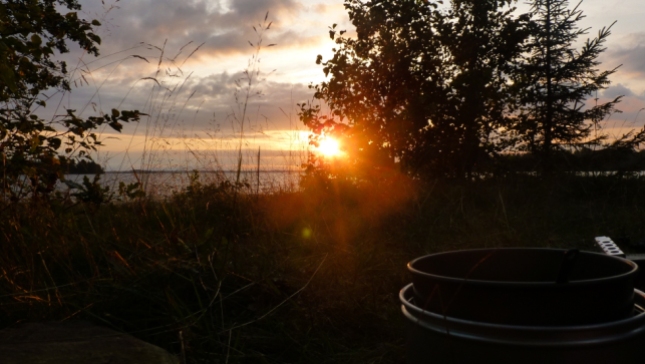 We left Sweden and stopped in Copenhagen again to see the Little Mermaid, which was actually moved to a exhibition in China… bad timing 😉 There were still a lot of tourists around the low resolution screen that replaced the actual statue. Next, we walked to the Kastellet – one of the best preserved star fortresses in Northern Europe according to Wikipedia. It’s a cool place to see very close to the Mermaid and certainly worth a visit.

This rounds up my trip to Sweden from 2010! Definitely keen to come back, next time will be a complete different trip in the polar regions of the Lapland though 🙂 Thanks for reading and stay tuned for the video, I just need to add some subtitles since it’s in German. 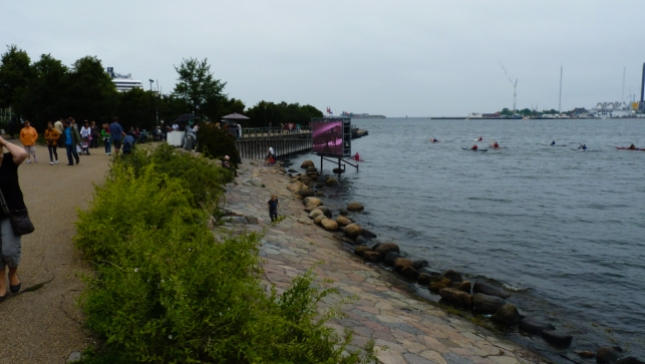 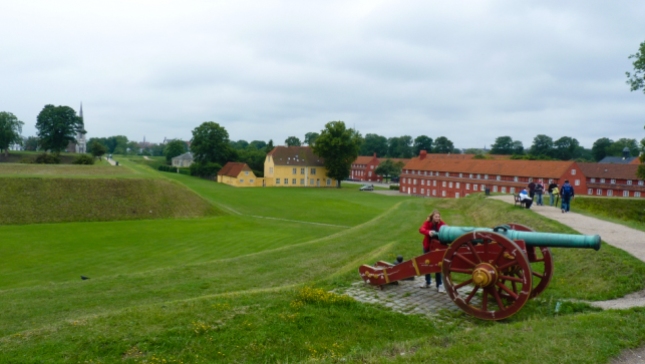 Thanks for reading! I hope you enjoyed this entry and would appreciate a comment below.

If you want more, head over to my Travel Report or Photography pages. Or join me on one of my Upcoming Trips!