The Canary Islands are a frequently visited destination for Europeans; I made my way there in February of 2009 – marking the start of my parent-free traveling life after my time as a professional gamer.

By the time of this trip, I worked for PHORMS for half a year and I was getting along very well with my colleagues. We decided it was due time for a first trip together. So, Sabine and Marco joined me to visit Gran Canaria – the biggest of the Canary Islands. Heading down south-west for about 1350km, we could make sure to avoid the German winter and get some sun, combined with nice beaches and landscapes.


We arrived during the day and immediately headed out to look for our apartment called “Casablanca”. It was a bit tough to find, but turned out to be a small yet very cosy place to enjoy the 24-26°C warm evenings and prepare food. Wasting no time, we showered up and walked to the beach – the sun was still shining a little bit, which was a very nice feeling compared to the cold winter back home.

It took us only a small amount of time to check out the nearby areas around the beach, but we were still very hungry from our trip so we stopped by a pizza place to get dinner and play around with Marco’s sunglasses – it was so nice to be able to wear them in February! The day passed and we prepared for the night by buying cheap beer from the grocery store which we then consumed at the now darkened beach. Situations like these surely bring you closer to your colleagues.

After a couple of beer we decided to check out the local party scene, which only consists of a couple of bars and clubs who try to lure you into their realm with special offers. They all seemed the same and it quickly annoyed us, so, we just sat down at a random bar to drink some more beer – we’re Germans after all 🙂

Second Day – Fun at the Beach

A nice sunrise introduced us to the next morning and as we all know, there’s no better way to start the day with a good breakfast! At least if you are on vacation, because I rarely eat breakfast at home… In this case we just scrambled some eggs and combined them with pineapple, tomatoes and fresh orange juice, et voilà:

We finished eating and decided that it’s time for some pool action. The only problem we had at that point was that our small apartment didn’t come with a pool! So Marco and I just walked around and sat down at a pool from another hotel – the old people there certainly didn’t mind it, but they looked a bit confused seeing us smiling in the sun 🙂

Joining up with Sabine again, we headed to the beach and spent the majority of the time lying in the sun and swimming in the Atlantic ocean – pretty typical. I got bored after a while and decided to walk around with my camera which eventually lead me to the Dunes close to Maspalomas. It looked a bit like Egypt looking over the sandy dunes, but the ocean was always very close and it was no problem to get back to the other guys fast again – It was definitely worth the walk though! 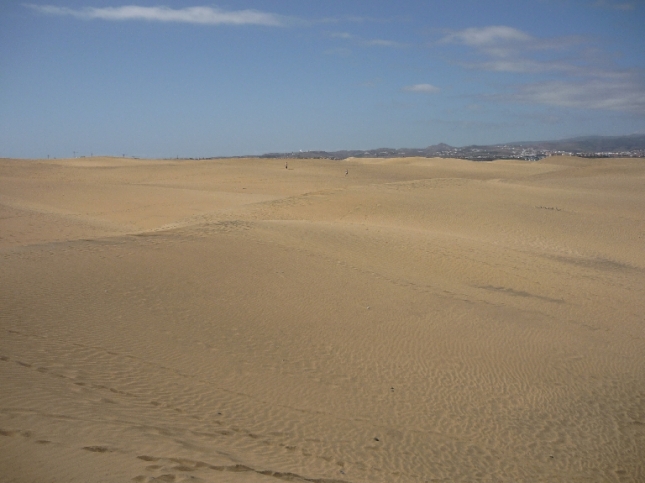 As this was our “lazy day”, we didn’t really do much more afterwards rather than talking about our car trip for the next day and other stuff. So we went back to our Apartment, refreshed and visited the party area again, only to be disappointed yet again. At least I, personally, cannot recommend to go to Gran Canaria in order to party.


Fortunately, we didn’t come to the island to party: we wanted to check out the beautiful landscapes! And that’s exactly what we did on our last day. It was a bit difficult to find a place to rent a car as it was either a Sunday or national holiday (can’t remember exactly anymore) but after walking around for a good amount of time we finally found a place to rent a car.

We wasted no time to start driving as we already figured out a route the evening before. The landscape was pretty stunning – we didn’t really expect it to be that nice. We drove along the typical serpentine stylish roads, always gaining and losing altitude. We had to stop a couple of times in order to enjoy the view and the weather was still very good which made this day my favorite of the trip. Too bad my camera was pretty shitty back then but I hope these pictures still show a bit of the nature’s appearance over there.

Our goal was to reach the top of the highest mountain of the island – Pico de Las Nieves (1949m) – and as we were ascending more and more we could already figure out that we might get unlucky with the weather at the the summit. From now on the clouds where getting more and more present and it was already pretty safe to say that we won’t be able to see anything up there.

Nevertheless we still went on and eventually found ourselves in a thick layer of fog, forcing us to turn around very close to the highest point of the island. Would have been a great view with good weather I guess… 🙁 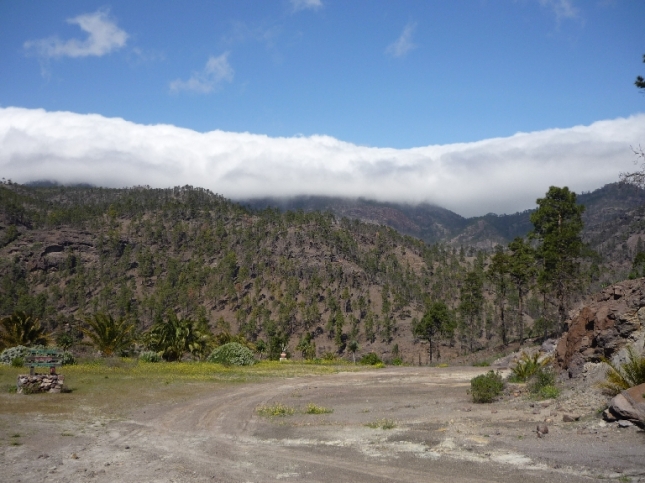 The clouds and fog on our way to the summit.


While we were driving down the mountain to the other side of the island, we crossed a small village and had the possibility to refill our supplies at a local store. The people there couldn’t really talk English as they were already pretty old, but somehow, you always manage to communicate. Driving further for some more we came across a small restaurant. I had some chicken with a salad and it was pretty nice. This was also the only way to get something to eat in this area so we would have been happy with nearly everything 🙂 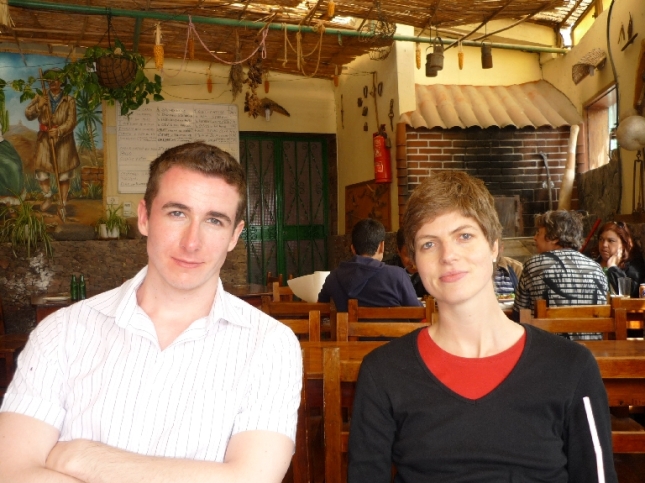 A nice little Restaurant in the mountains.

We encountered a camping area which actually hosted other people on our final stretch back from the remote mountains – in general there was not so much traffic during our stay but this might have been due to the fact that it was February 😉 We did some more stops on the island and then reached the highway, leading us to “Casablanca” yet again for the last night.


The last day was very short as our plane was departing around 2 P.M. so we had no chance to really do a lot with the last day. We packed our luggage, returned the rented car and took the bus to the airport in Las Palmas.

Looking back to this trip nearly 3 years ago, I have to say that it was a very important year for me: I finally realized how important it was for me to travel around and from this point on, I started to spend every day of vacation to pursue my new hobby.