One new continent, five new countries and an endless list of new cities and activities were awaiting me when I started my two month trip through South America this summer. Joined by a friend and a Couchsurfer, it was a journey filled with great adventures and also some unpleasant moments. This will be the first out of many posts to tell you all about it and everything started in Colombia’s capital.

Having two months off work was something very unique for me and a lot of my friends and especially colleagues reacted in the same astonished fashion when I told them about it. Well… I can’t blame them! I used my remaining vacation days for August and all of July was unpaid. Adding the actual overall trip costs (5200$) to the missed salary easily makes this the most expensive trip I’ve ever had. Even though the three weeks in Africa were nearly as expensive at about 4000$!

little excel sheet that made everyone perfectly clear that they are dealing with a German guy. In the end, we did not miss any of our flights, buses or booked trips and only made one minor change by adding yet another mountain to climb in Bolivia – so I guess the plan was pretty damn good! Couchsurfing was also part of the trip and we had a big list of people wanting to meet or host us for the first week.

Upon arriving at London Heathrow Airport I had to go through the hassle of filling out the ESTA application in order to enter the United States of America – which took its sweet time on my old phone from Germany. I eventually made it to the plane though and arrived in Miami at midday with a pleasant waiting time of just two hours for my connecting flight to Bogota. Having boarded that flight, I was surprised by Moritz as he somehow got in the same machine, even though he was supposed to arrive in Bogota an hour later than me. We already had a great trip to Africa last year and this time, he was the only person to get enough days off work to join me.

View on Bogotá from Ana’s place 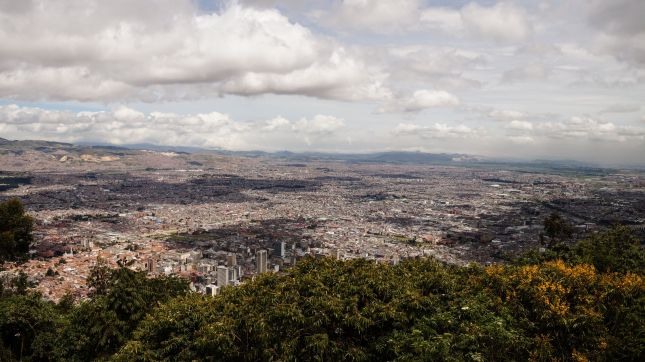 View on Bogotá from Monserrate.

On top of Monserrate.

We landed in Bogota at 7PM and our lovely host Ana was already waiting for us. Ryan, who previously contacted me through Couchsurfing to ask if he could join the trip, arrived a bit later and had some troubles spotting us on the other side of the big glass front behind the luggage claim. The rest of the evening was spent in Ana’s place where we were introduced to the Banana of the Latinos: The Platano! It looks very similar, but you should never eat it raw and instead fry it a little while and then serve with some kind of dip.

There was not a lot on our Agenda for the next day, we wanted to take it a bit slower in the beginning of the trip as we knew that the upcoming weeks will be rather packed and we will also have a lot more cities to explore as well. The decision to fly into Bogota was based on an amazingly cheap flight that I was able to book, so we might as well check out a bit of Colombia before heading down to Ecuador. Having cheap flights within the Continent thanks to the LAN AirPass certainly made this seem logical to me!

Starting the first full day of the trip rather late, we eventually made it to the top of Monserrate (3.152m), a mountain overlooking the city. Lazy as we were, we obviously took the Funicular to get up. We had no breakfast so far and this clearly made our first priority to find something nice up there. This eventually lead to our first contact with the amazing empanadas, which should follow us throughout the complete two months.

We spent about an hour on the mountain and enjoyed the sunshine while being cold from the high altitude wind before heading back down, using the path this time. It was a nice walk and I came up with some stupid ideas for my video blog, but nothing really else happened besides us walking (and running) down a path in the sun. So we came back to the real important question again: What should we eat for lunch? Both of them could not speak Spanish at all and mine was very limited to say at best, so we decided to kick off our South American Lunch experience with a nice Italian BMT from Subway – you just can’t go wrong with that!

Afterwards we proceeded in a zig-zag course through the streets of the city, crossed some cool Streetart on the way and eventually ended up on the Plaza de Bolivar. Surprisingly, we were already encountered with the first Llamas there! I was expecting them a bit later and these two fellows really didn’t look that happy in their role as model for the tourists. Another dog, on the other side, could not have a better life, being dragged through the streets on a small wagon by his master.

The gold museum… A major tourist draw but not too interesting for us at the time.

While we had another – very traditional – snack at Dunkin’ Donuts, we started to realize that all we did so far was going up a mountain and eating the whole day, so we eventually decided to check at least one more attraction of the city. TripAdvisor advised us to see the Gold museum, which turned out to be quiet boring for us at the time – maybe we were just too tired from eating the whole day…

Afterwards we were supposed to meet up with some of the Couchsurfers, but due to a lack of Colombian SIM cards on our side, we missed them by a few minutes as we decided to head back to Ana’s place right before one of them actually arrived. Before we could dive into the night life with Ana and her friends, we obvisouly had to get dinner first! Moritz and I both ordered two burgers each, which certainly drew the attention of the locals towards us. Well, Germans can eat a lot 🙂

The first night out in Latin America was really interesting to say at least. Joined by Ana and some Couchsurfers, I danced Reggaeton for the first time in my life and have to say that this style does not really suit me very well. I just don’t know what to do while the girls are doing their thing in front of me… And since we are talking about them, they are indeed very beautiful over there and in contrast to Europe, they actually approach you as well! Can’t complain about that 🙂 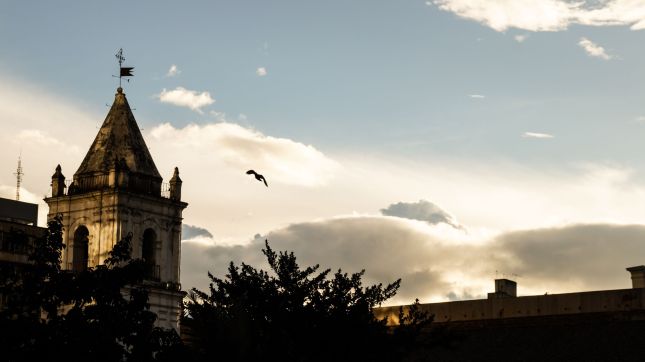 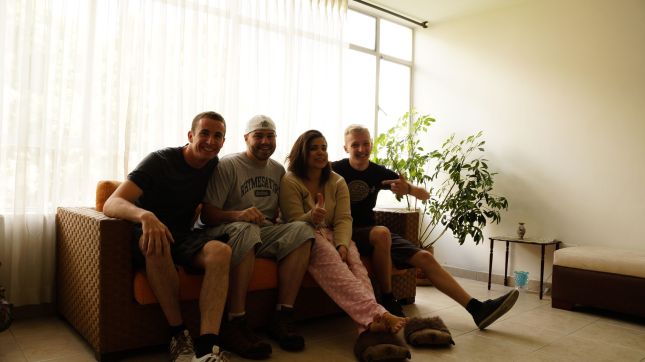 Our first Couchsurfing host Ana with her awesome shoes! 🙂

Ana prepared a nice breakfast for us on the next morning and was a great host in general, I can’t remember any conversation with her that did not end in laughter. Saying good bye was not easy as we where slowly started to get used to each other, but I’m sure that we will meet again some other time. We took off to the Airport to board our first flight with LAN. Medellin was waiting for us and I had no idea what to expect from the city, other than it used to be one of the most dangerous places in the world.

Thanks for reading! I hope you enjoyed this entry and would appreciate a comment below.

If you want more, head over to my Travel Report or Photography pages. Or join me on one of my Upcoming Trips!

Posted by Chris on 20th September 2013 in Travel